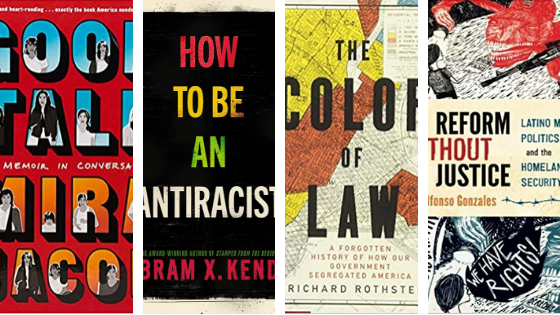 You are likely hearing more about racial diversity, equity, and inclusion in social-impact spaces recently. Although none of these ideas are new, cause-based organizations (many of which largely led by white people) are shifting their missions and programs to include a wider lens of racial equity.

Here’s a shortlist of recent, mostly within the past year, books for those who want to know more about White supremacy and the impacts of racism that we deal with today. These authors are influential voices in their fields, speaking unapologetically their own truths and experiences. Their works are examples of how everyone can show up in their own spaces for conversations based on reasoning and research rather than anger and frustration. Some of the books have humor, but most don’t. Some are academic. But they all offer solutions, or at least enough perspective for readers to feel confident in having necessary conversations.

1. The Color of Law: A Forgotten History of How Our Government Segregated America

A fascinating read about the government's role in segregating the country, the premise of this book exposes the unjust and often untold history of housing policy, city planning, and racial zoning that became the foundation on which discriminatory practices in America were built on. Starting in the 1920s, author and historian Richard Rothstein chronicles the practices — segregated public housing, racial zoning, the destruction of integrated neighborhoods — that became the foundation of the racial unrest facing black neighborhoods, like in Baltimore and Ferguson, in the modern-day United States. A stunning history of the racial divides in metropolitan America and how they got there, “The Color of Law” makes clear the undeniable connection between discriminatory laws and policies enforced by the government and the long-reaching grasp of discrimination still alive today.

2. White Fragility: Why It’s So Hard for White People to Talk About Racism

This groundbreaking book explores the counterproductive reactions white people have when discussing racism that serve to protect their positions and maintain racial inequality. The concept of this book challenges racism by working against and understanding what the author terms "white fragility", a reaction in which white people feel attacked or offended when the topic of racism arises. The author discusses many different aspects and manifestations of white fragility that DiAngelo personally encountered in her work as a diversity and inclusion training facilitator.

3. How to Be an Antiracist

“The only way to undo racism is to consistently identify and describe it — and then dismantle it,” writes professor Ibram X. Kendi. That is the essence of antiracism: the action that must follow both emotional and intellectual awareness of racism. Kendi's concept of antiracism reenergizes and reshapes the conversation about racial justice in America--but even more fundamentally, points us toward liberating new ways of thinking about ourselves and each other. In How to be an Antiracist, Kendi asks us to think about what an antiracist society might look like, and how we can play an active role in building it.

Placed within the context of the past decade's war on terror and emergent Latino migrant movement, “Reform without Justice” addresses the issue of state violence against migrants in the United States. It questions what forces are driving draconian migration control policies and why it is that, despite its success in mobilizing millions, the Latino migrant movement and its allies have not been able to more successfully defend the rights of migrants.

5. Good Talk: A Memoir in Conversations

Inspired by her popular BuzzFeed piece "37 Difficult Questions from My Mixed-Raced Son," Mira Jacob's touching, often humorous, and utterly unique graphic memoir takes readers on her journey as a first-generation American. At an increasingly fraught time for immigrants and their families, Good Talk delves into the difficult conversations about race, sex, love, and family that seem to be unavoidable these days. Jacob also investigates her own past, from her memories of being the only non-white fifth grader to win a Daughters of the American Revolution essay contest to how it felt to be a brown-skinned New Yorker on 9/11. As earnest and moving as they are sometimes laugh-out-loud funny, these are the stories that have formed one American life.

Got a book you think we should feature in a future list? Drop a note to us at @netimpact or media@netimpact.org.