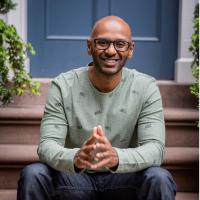 As a nonprofit leader by day and hip-hop artist by night, Mohan is known as the “Batman of Social Impact.” In his “Bruce Wayne” world, Mohan is the CEO of Our Turn, the nation’s leading movement of young people fighting for educational equity and justice. As the “Dark Knight,” Mohan assumes the moniker of Ahmen, described as an artist with “the flow of a socially conscious Eminem…and ability of Common.”

Mohan’s #Troublemaker music and message to disrupt the system is inspiring audiences around the world, as evidenced by performances and talks at major events such as the World Economic Forum’s Global Shapers Summit, Stanford Social Innovation Review’s Frontiers, IFC, NYU Social Innovation Summit, Frank, and INBOUND. As a result, Mohan has been identified as a “Rising Star” by New York Nonprofit Media, who named Mohan one of their 2015 “40 Under 40,” a “Next Generation Leader” by the Human Services Council, and was featured in “Good is the New Cool,” an Amazon Philanthropy & Charity #1 new release.